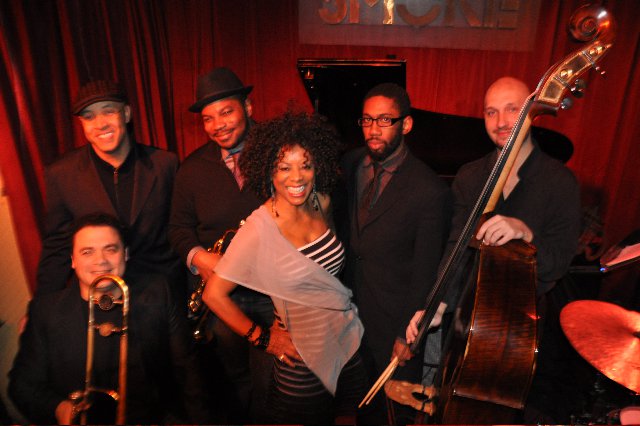 With Mosaic and Jeremy Pelt

June 22, 2011 – Eve Cornelious & Mosaic pack more finesse, fun, and pithy natural authority into a one-hour set than combos half again as large in twice the time. Cornelious’s big voice rises out of her small frame with a take-no-prisoners sound. It slides, turns and dips in complete control, shaded by the appealing grit of fine sandpaper. She has some of the sass of Sassy (Sarah Vaughan), a taste of Abbey Lincoln’s honeyed lushness, and brightness all her own. The artist’s girl-from-the-hood attitude (curiously her hood is North Carolina) and obvious pleasure in performing are joyfully infectious. She leans into the music, letting it course through her, elbows almost pumping it out. Louis Armstrong-like growls are sexy. Her scat is freewheeling and accomplished—really, a third horn.

Jeremy Pelt’s suave, silvery trumpet (and later, flugelhorn) are equally adept at the long, cushiony phrasing of a seductive “Midnight Sun” (Lionel Hampton/Sonny Burke/Johnny Mercer) and the feel-good bounce of “Give Me the Simple Life” (Harry Ruby/Rube Bloom). Eyebrows raised, he unhesitatingly delivers the goods with as much stage presence as skill. Trombonist Clark Gayton’s staccato bursts and husky tones create rhythmic intricacy and churning riffs one doesn’t expect from a trombone. He has real flair for a kind of burlesque funk emerging later in the program. Carlton Holmes (piano) creates clean, inventive, off-the-beat embellishment without ever losing melody—a feat. Holmes’s solo in “Golden Time of Day” (Frankie Beverly) is achingly evocative.

The arrangements of “Golden Time of Day” and “Midnight Sun” are particularly beautiful and nuanced. Only “Thou Swell” (Richard Rodgers/Lorenz Hart) seems less than it might be—rushed and zig-zagging, missing the mood and ballast of the original song.

This is a terrific, tight, juicy collaboration. Extremely entertaining.